#73 The challenges for women in medicine are ongoing 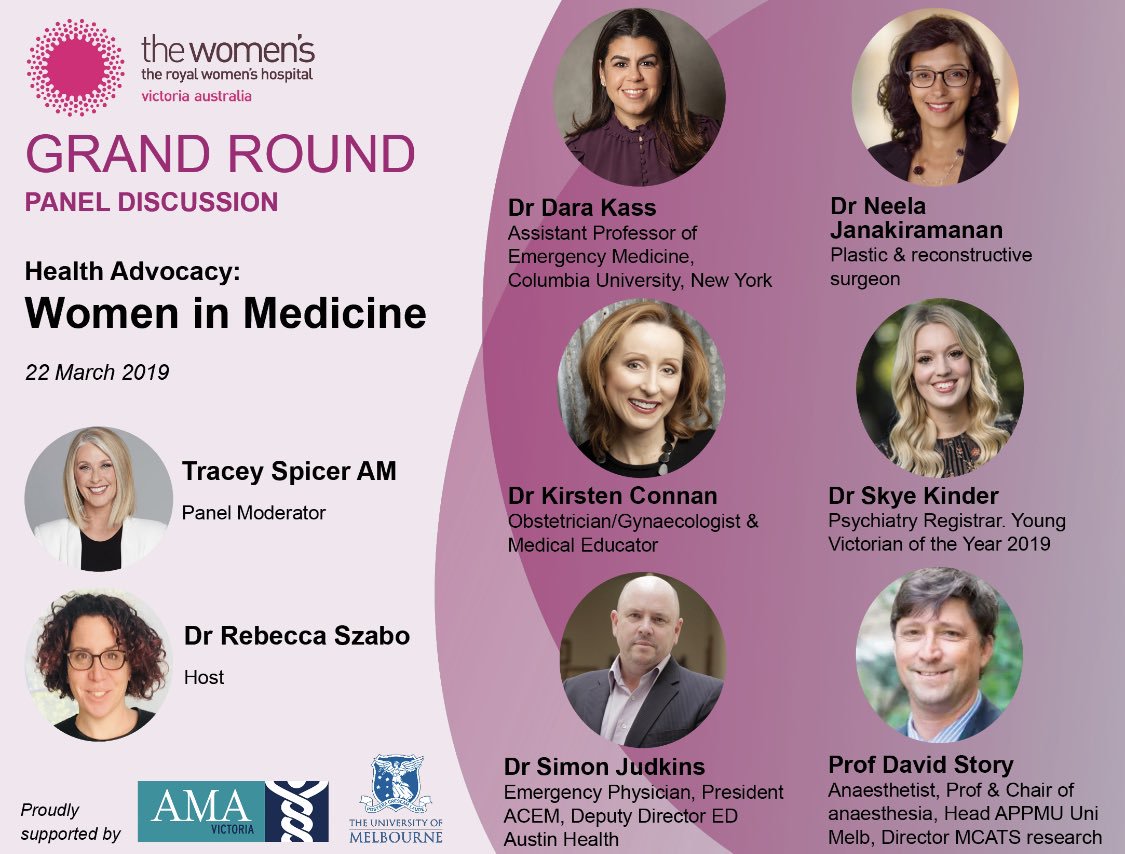 As a female final-year postgraduate medical student, before even entering the medical workforce, I have already found myself in multiple situations where I have asked, “Why can’t women unquestioningly be doctors?”. An example of which was highlighted during my second-year of medical studies when the surgical registrar informed our team about the new registrar who would be joining us. One of my male peers commented, “So all the reg’s will be female”. I remember instantly having two thoughts. Firstly, why was this comment necessary; what value did it add to our conversation? Secondly, if the team consisted of three males, it would have been highly unlikely that the comment was made in the first place. This moment, although seemingly benign, is a reflection that the challenges for women in medicine are ongoing.

On 22 March, the Royal Women’s Hospital held a Grand Round Panel Discussion on the topic of Health Advocacy for Women in Medicine. If you were not aware of this event or missed the opportunity to attend, this month’s Women in Medicine Committee blog provides an insight into the issues covered. The panel consisted of six accomplished and highly esteemed doctors representing a range of medical fields, ages and genders:

Yes, you read right, both genders were represented on the panel, with two males and four females. If you are questioning why two males were included on a panel for the topic of women in medicine, you are not alone. I was initially surprised when I saw the two men on the Grand Round advertisement poster and this was also the first point the host, Dr Rebecca Szabo, addressed. Dr Szabo clearly emphasised that all panel members were feminists and the inclusion of two male doctors on the panel further reiterated one of the key messages from the discussion; that change for women in medicine cannot be achieved by women alone.

The discussion commenced with panel moderator, Tracey Spicer, asking for a definition of equality and equity and why this was an issue for women in medicine. It was agreed that equality means that everyone gets equal access to opportunities and resources, whereas equity relates to a reflection of everyone getting the opportunities and resources they need. Both of these terms continually came up throughout the afternoon and were discussed in the context of leadership roles, representation in different medical fields, life outside of medicine, including personal responsibilities and priorities, and the gender pay gap.

So why is equity and equality crucial for women in medicine? Dr Kass emphasised that the importance doesn’t just lie with women. Diversity in medicine is fundamental for leading to and achieving better outcomes for patients, along with greater strength in terms of team unity and results within different medical units. Despite this being an important topic for conversation, the panel raised the issue of the difficulty engaging some individuals in these discussions. It was suggested that this may be attributable to the idea that our personal perceptions of ourselves are fundamentally good and therefore there is often resistance to engage in such discourse.

Another key issue that the panel raised was the continued lack of women in leadership roles, though they did acknowledge that this was slowly changing as more women enter the medical profession. The presence of women in medical leadership roles continues under the umbrella of diversity within medicine. Again, along the lines of attaining the best outcomes for the patient and the medical team, it was highlighted that it does not benefit anyone when certain individuals hold on to such positions for years and both possess archaic beliefs and an inability to adapt. All panel members echoed the sentiment that diversity in leadership is crucial for medicine and that we, as the medical community, cannot move forward if a change in attitude does not begin with high positions of leadership.

The challenges of working, motherhood and parental leave were also explored. As the average age of entry into training programs and the average age of first-time mothers simultaneously continue to rise, there was a strong call to acknowledge this and for medical practise to adapt. The panel proposed more support and flexibility for trainees through providing part-time training programs, more breastfeeding rooms and ensuring that work environments are inviting for doctors and their children.

I found it absolutely bewildering and disheartening to listen to Dr Connan’s anecdote of a doctor and mother to a six-week old infant who was refused entry by security into a conference for which she was one of the presenters, as children were banned at this particular conference. It is unacceptable to continue to hold the idea that there cannot be an overlap between one’s career and their personal life. Greater accessibility to childcare services during conferences for professionals with parental obligations should be the norm.

The conversation continued with the topic of shared parental leave and its role in medicine. It was proposed that many individuals still hold the perception that men do not have an active role in parenting. This statement was quickly followed up with the notion that the best way to support maternity leave is to equally support paternity leave. Dr Connan reinforced this belief when discussing her experience as a young doctor, observing two senior doctors that both equally took parental leave. She emphasised that these two doctors actively taking their entitled leave set a precedent and demonstrated to the entire hospital community that shared parental leave was a normal standard.

So what does it mean to discuss the topic of women in medicine? In an ideal world such topics of discussion would not be necessary and women in the medical workforce would also not face separate challenges from their male colleagues. Nonetheless, this is not the case and consequently talking about these issues in an open platform rather than behind closed doors provides all individuals with the opportunity to spread the message that these attitudes and behaviours are no longer acceptable in medicine. With the increasing number of female graduates and postgraduate medical students, these conversations and changes are critical.

Video of the Grand Round Panel Discussion can be viewed here.

The Women in Medicine Committee is hosting a workshop around parental leave entitlements on 6 June at AMA Victoria House.

Hear from AMA Victoria's Industrial Relations team as well as a panel of doctors sharing their different approaches to planning a family whilst working in the medical industry.